Eleven million taxpayer-funded dollars.  Supposedly to help 400 people in Detroit find jobs.  Even if every one of those 4o0 people found a job, that would be $27,500 in taxpayer money spent, per job.  Ludicrous enough, no?

A chunk of an $11 million stimulus grant meant to provide low-income Detroit residents with clothing for job interviews reportedly aided just two people — far short of the 400 job-seekers the money was meant to help.

The findings were part of a new audit on the city’s Department of Human Services, according to The Detroit News.

That, my friends, comes to a cost of $5.5 MILLION dollars.  Per job.  Nice return on investment there, Barry.
Fast forward to yesterday (emphases added):

In the wake of lobbying by President Obama and Senate Democratic leaders, the Senate Thursday defeated legislation to speed up construction of a U-S.-Canadian oil pipeline.The White House victory came after the president started personally calling Democratic senators Wednesday night. The vote underscored the extent to which rising gas prices and energy supply have become a central political issue.

So, to Barack Obama, a stimulus program that costs taxpayers hundreds of millions, and which is a failure by any clear-thinking person’s standards is hailed as a success; while killing a program that creates at least 25,000 jobs, all without a dime of taxpayer money, is somehow considered a ‘victory.’

To Obama, Government is reality. The government is the source of all that is good and just in the world.  The private sector is what is contrived. To Obama, the private sector is an anomaly; an abomination that must be controlled so as not to infringe upon the government’s influence in people’s lives. The god of Government is a jealous god. Thou shalt not have strange Gods before it.  Even religion itself takes a back seat to Obama’s real religion. 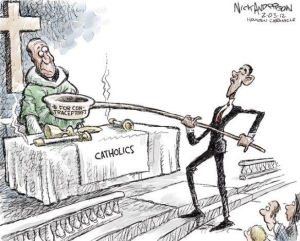 After all, in order to appease the god of Government and to gain its good graces, one must certainly give alms:

More than half of Obama’s 47 biggest fundraisers, those who collected at least $500,000 for his campaign, have been given administration jobs. Nine more have been appointed to presidential boards and committees.

At least 24 Obama bundlers were given posts as foreign ambassadors, including in Finland, Australia, Portugal and Luxembourg. Among them is Don Beyer, a former Virginia lieutenant governor who serves as ambassador to Switzerland and Liechtenstein.

Obama has appointed 59 ambassadors who were not career Foreign Service officers, and of those, 40 percent were bundlers.

Welcome to the church of Obama.