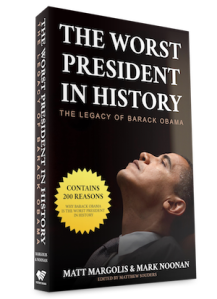 It has now been three months since Mark and I first made our book, The Worst President in History: The Legacy of Barack Obama, available for pre-order. Since then, it has sold well. Really well, actually. Better than we expected. Almost immediately it was featured as a “Hot New Release” in the ‘Biographies of U.S. Presidents’ category… the category, in which, it would eventually become a #1 Best Seller. As of this post, the book is still in the top five of the category. Not too shabby!

Every day I wonder, “is this going to be the day it all ends?” And yet, three months later, it continues to sell. This won’t last forever, of course.  But it’s a great feeling while it lasts.

Thanks to all our readers who have bought the book! And to those who haven’t yet, thanks in advance for when you do!