Well, Matt and I finally managed to get it done – the massively revised Worst President book comes out on July 2nd. You can pre-order an electronic version for only $0.99 – so, just get on over there and do it.

I’d like to say that this was some sort of labor of love and that we enjoyed doing it, but that is simply not the case. At the end of it all, when the whole mess that is the Obama Administration was set out in print and we had gone over it multiple times, the emotions are a mixture of anger and sadness. Anger at the way President Obama has relentlessly done the wrong thing over and over again and sadness at how much damage he has done to the greatest nation in history. 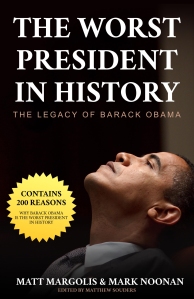 I do urge everyone to read it; it is important. All through the Obama Administration, the President’s media lackeys have ruthlessly covered up the truth and a great deal of what has gone wrong hasn’t even made a ripple in the public mind. You may think you have a good deal of information about Obama, but mostly what you’ve got is those failures so large (such as Benghazi and Obamacare) that even MSM efforts failed to keep them out of your mind. Most things Obama has done were only briefly reported on, and thus slipped out of public view before an impression was made. But the reality is that in every single facet of Obama’s official life what has been done has been wrong, or turned into an abject failure, or a combination of the two. And Obama has been doing quite a lot – he did promise to fundamentally transform the United States, and he has done that. Until you read Worst President, you simply don’t know the whole story of what has been done to the United States over President Obama’s term in office.

We are certain that our Progressive friends will have no kind words for the book – we are equally certain that our Progressive friends will refuse to read the book. I promise to do a post here each time I can determine that a criticism of the book is based upon something which is in the book. I suspect there won’t be many such entries. There are no secrets in the book. We make no revelations of things which have not been in the public square. Every claim of fact is backed up. Our sources range from the conventional MSM, to the right, to the left and every manner of credible information available. Indeed, we often use Obama Administration documents to back up our case. And while our Progressive friends won’t have much use for the book, some people have looked it over and found some things to say:

“I’ve been following the writing of Matt Margolis and Mark Noonan for years and their takedown of Barack Obama is their best work yet. If you want to know why the history books will have a dim view of Barack Obama, this is the book to read.”

“Barack Obama’s legacy of failure isn’t going anywhere. Margolis and Noonan’s careful history and analysis will therefore prove an important touchstone for discussions on his Presidency in the decades to come. A must-read.”

“The legacy of Barack Obama will be increasingly obvious. With every terror attack, every Obamacare failure, and every economic drop, we will witness the pain he has inflicted. Margolis and Noonan can be pardoned for giving us a peek at how bad it will be.”

–Dick Morris, author of Power Grab: Obama’s Dangerous Plan for a One-Party Nation and Armageddon: How Trump Can Beat Hillary

7 thoughts on “The Worst President in History: The Legacy of Barack Obama”